I'm not especially interested in parsing out which of the fictional teenagers should have dated the other fictional teenagers in the movie Pretty in Pink; I don't spend a lot of time thinking about who I should have dated in high school and I see no reason not to apply the same general air of resignation to Andie, Blane, Steff and Ducky. They're all in high school! They can date everyone in a variety of constellations, they have time for whatever.

I don't know if you Care about John Hughes movies. You may not. It may interest you to know that almost every John Hughes movie is about lesbians except for, perhaps unsurprisingly, Some Kind of Wonderful. At any rate, Pretty In Pink is – correctly, I think – the most beloved of the second-tier Hughes. If you care about any ending to a John Hughes movie, it is probably this one. Here is how the movie ends: Molly Ringwald gets together with Andrew McCarthy, supposedly because the original ending, where she gets together with Jon Cryer, didn't test well.

They would have been a nice couple in a lot of ways. Remarkably ill-suited in others. It would have made him very happy to get to kiss her, and I would have enjoyed seeing him become very happy. (I have no opinion whatever on the character played by James Spader, which has always surprised me. I often feel like I ought to have more of a response to James Spader, especially 1980s-era James Spader, but I cannot help how I feel. I do like that he married William Shatner on Boston Legal, and so I suppose I am inclined to be warmly disposed towards him as a result of the Shatner spillover.) My primary concern is rescuing Duckie from the slag heap of history, not in determining whether or not he "ought" to have dated Andie at the end. Most of the Duckie Discourse in recent years has been centered around whether or not he is an example of the Nice Guy™, and if so, whether or not we should all be mad at him for it. My answer is No, for at least two reasons:

1. Duckie seems wholly uninterested in any sort of Niceness throughout the course of the movie.
2. Duckie is a lesbian.

Listen, having that one pompadour haircut with a forehead curl, relentless and furiously pining for your best friend, wearing circular sunglasses, hanging out at someone else's job because you don't have anywhere better to be, and being one of the poorest kids in school aren't necessary preconditions for lesbianism, but like, add 'em all up and baby, you've got a stew going.

There are exactly two Gay Modes of Feeling, no more and no less. Mode of Gay Feeling the first is Total Domination, How Dare You, I Will Never Die, It Is Impossible For Me To Die, I Thrive On Being Misunderstood: 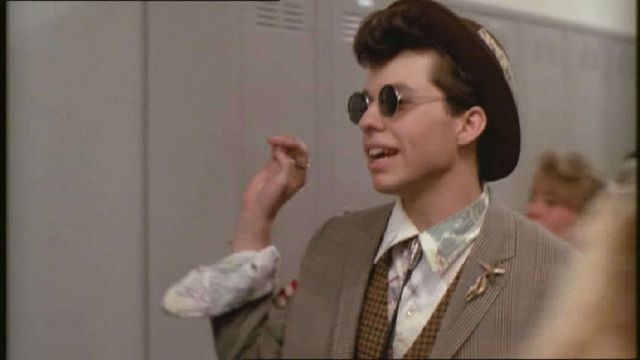 It's all carefully balanced hats and perfectly styled Teddyboy hair and pastel cuffs and either having no sex at all or the kind of sex you can't tell your friends about because they're going to get worried for you, and it's wonderful and it's exhausting, and you're funnier than anybody else both because you have to be and because it makes sense and more than a little because you are firmly convinced that a movie crew is always just out of sight recording your entire life and you are playing to the cheap seats, every minute.

Here is the other Mode of Gay Feeling: 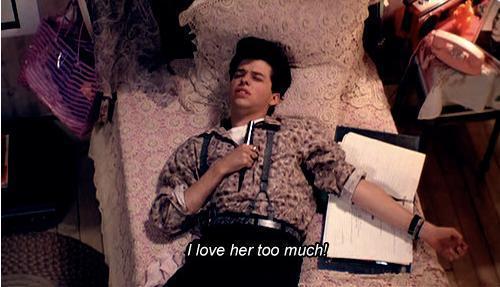 You still look fantastic but your stomach hurts and you will never get out of bed. You have learned that rolling your sleeves up over your forearms is very useful to you, sexually speaking, but the person you love and the people you sleep with have absolutely nothing in common, including what they think of your forearms.

I'm not suggesting that Duckie was a lesbian in order to justify whether or not it was right of him to assume that his being very in love with Andie in any way created an obligation in her to return his feelings; assuredly it wasn't! Assuredly it isn't! And yet: how many times in my own life have I thought, wrongly, the feelings I feel now towards the object of my affections are so blindingly obvious that it is as if I am carrying around the beaming lantern from a lighthouse inside of my chest. How could anyone not notice? When of course no one has noticed.

I'm not saying lesbians have a monopoly on silence, either, not even in the 1980s; there are straight boys who love women, probably, and are reluctant to speak on the subject. But that would have been a good reason, I think, for Duckie not to say anything, and yet to feel furious anyhow for not having been understood. It is a hard thing to want to be interpreted and not offer anyone a key to the translation.

Is there anything gayer than refusing to ask someone out, then holding them personally responsible for the silent, ever-increasing intensity of your feelings until they tell you casually they're going on a date with someone who asked them out (which is a SUPER NORMAL THING for a person to do), then exploding with the equivalent intensity and righteous indignation of Jennifer Holliday's rendition of "And I Am Telling You I'm Not Going," only Caucasian and without singing?

"I would've died for you" is a total non sequitur to the sentence "I am going on a date with a boy named Blane," but it's also the only honest thing one can say in response. One shouldn't say it at all, but if one is going to, seventeen is the last acceptable age. This sentiment, by the way, is at least 25% of the reason why Bruno Mars is also a lesbian; if you are not a lesbian at the beginning of writing a song as histrionic and self-pitying as "Grenade," you certainly are by the end of it. (I don't know if Bruno Mars actually wrote the song "Grenade." Don't crowd me, kid, I'm just getting warmed up.)

The fact that Duckie's most memorable scene involves fervent, furious lip-synching (for her life?) feels almost too on the nose. She bursts into the record store where Molly Ringwold and the wonderful Annie Potts work, disrupting everything, but she does so in perfect silence. It's a beautiful performance of total frustration – she's exhausted by the end of it, drooping and spent – and she doesn't sing a single word, doesn't make a single sound. She throws herself to the ground over and over, and she also wears a bolo tie. And you can watch Duckie in that scene (and Andie's resultant confusion and panic) as the tantrum of a boy who has mistaken owning a lot of hats for emotional sensitivity, who demands too much time and energy and attention from the women around him, you absolutely can.

You can also watch that scene as the tantrum of a lesbian who has mistaken owning a lot of hats for emotional sensitivity, who demands too much from others; just because I think Duckie is a lesbian doesn't mean that she is making excellent and healthy choices. Duckie twitches around afterwards like a hummingbird or a shark, as if her hands stopped moving around in emphatic gestures for even a second they might betray her into giving something away. But I recommend watching that scene, focusing as much as you can on Annie Potts' face throughout. She sees something she recognizes, wants to hail in direct acknowledgement, and also challenge. I think that thing she recognizes is a particular sort of lesbian sadness, and I want to recognize it too.

Yesterday I went into an antique store on my way to the grocery store and I hailed the woman behind the front desk. "I want to buy at least eight silver rings from you," I said, and had a marvelous time doing exactly that. I was wearing a faux-fur vest, black high-tops, a floral hat, a long pastel shirt, and four fake leather bracelets. I was so happy. You can't see the rings in this picture, but I want you to know that I was wearing them.

There was a ninth ring that I did not buy, because things were getting a little ridiculous, and the woman behind the counter said, "Tell you what. I'll put it to the side, and if you can't stop thinking about it, you come back." There are so many things I can't stop thinking about! and so many places I find myself going back to! Aren't things getting a little ridiculous?

A best-beloved friend of mine is working on a project of George Eliot and just texted me something Jane Carlyle once wrote about GE:

I hope to know some day if the person I am addressing bears any resemblance in external things to the idea i have conceived of [them] in my mind...How ridiculous all this may read beside the reality.

I responded by texting back, "I IDENTIFY STRONGLY WITH ENDING THE DESCRIPTION OF A FERVENT, CHERISHED WISH WITH 'HOW RIDICULOUS,' I LOVE YOU JANE CARLYLE."

"it really is pretty sweet," my friend texted back, "given how awful she was."

Overreacting and silence and suspenders just about sums it up; Duckie might have been awful but I can forgive her, because she was awfully sweet, and I wish I could do more to help her.